The Digital TV tuner device registration application is a part of the Windows Media Center. Its job is to receive and display a digital signal for your PC. The application is primarily used to watch digital cable channels provided by your local cable operators on your PC.

This feature was present in Windows 8 pro and 8.1 as a paid add-on. You may also Find this in all the Windows 7 versions including the Home Premium and Ultimate editions.

Windows Media Center uses TV tuner devices, or in other words the Digital TV tuner application, to record TV shows and play it on PC.

Should You Use The Digital TV Tuner Registration Application?

The Digital TV tuner application tends to slow the computer. It has been a common issue on Windows 8, 7 and Vista, which is probably why Microsoft discontinued it for Windows 10. So, the question remains whether you should use it.

It depends on how it is working on your PC. If you are noticing a slow-down in your PC’s performance, then it can be caused by the Digital TV tuner. Avast and MacAfee clearly indicate that the Digital TV tuner app slows down computers. But it is best practice to check for it on your own PC.

The process ehprivjob.exe is the main issue of Digital TV tuner. It can become glitched anytime and consume large amounts of system resources. Not just that, it can even store a large amount of data on your HDD/SSD. This is probably what’s causing your PC to slow down.

Other than slowing your PC, the app is not a security threat. Your privacy is safe with it. Now, it is for you to decide whether you should keep using it or not.

If you no longer want your PC to act as a TV and want the Digital TV tuner gone, then I have given the steps to do it below. To remove the Digital TV Tuner registration application, the Windows Media Player must be removed.

As I mentioned earlier, Digital TV tuner is only a scheduled task of Windows Media Player. So, it is required to remove it to get rid of the Digital TV Tuner application.

To uninstall Windows Media Player, follow the steps given below:

Bonus: Windows Features is the place where you get access to the default Windows settings, like Hyper V(link), the Internet Information Services, and various other features. You can also disable Internet Explorer(link) from here. 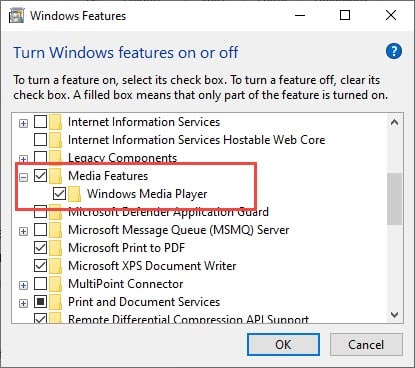 That’s it. Now you can check and find that ehprivjob.exe is no longer hogging your system.

Digital TV Tuner device registration application is a nice feature for the cable TV lovers. But in this current age of internet TV, it is not a necessity anymore. With the additional drawbacks of it slowing your PC, its best to remove it. If you have any questions related to this article, ask them in the comment section below.