You are here: Home / Software / YouTube 360 Degree Video Not Working On Android – How To Fix?

360 degree videos have been supported on YouTube for some time now. YouTube started supporting 360 degree videos in 2015. It brought a new dimension of content creation to YouTube. The immersion videos or 360 degree videos are video recordings shot in every direction at the same time with an omnidirectional camera or a collection of cameras.

Generally, these videos are best experienced on a VR headset, but it can also be viewed on smartphones and PCs. However, recently many users have reported that Youtube 360 degree video not working on Android and their PC. In this article, I have discussed what can cause this issue and how to fix it.

There can be several different reasons why YouTube 360 degree video is not working on your phone or PC. Here are some of the potential causes:

What To Do When YouTube 360 Degree Video Not Working On Android?

If you are unable to play 360 degree videos on your Android, then try the following troubleshooting to find and fix the issue.

The first thing you need to check when you are unable to play 360 degree videos on your phone is whether it has a gyroscope sensor or not. A gyroscope sensor is required for playing the 360 videos on Android. You can check the specification sheet of your phone, or you may install the 3rd party software CPU-Z from Google Play Store and have it check your smartphone.

If your smartphone has a Gyroscope but is still 360 videos don’t work on my phone, then try calibrating the gyroscope. To calibrate your gyroscope sensor, follow the steps given below:

(As every smartphone has different options in settings, this is just a general guide)

After Gyroscope is calibrated, check if still YouTube 360 degree video not working on Android.

One thing that may fix this bug is to force stop the YouTube app and restart it. This fixes many minor bugs and errors related to the app. To force close the YouTube app, follow the steps given below:

Check if now you can play the 360 degree videos on YouTube or not.

The last thing you can try is to update YouTube. Open Google Play Store on your Android and open the My apps page. Select YouTube and check if any update is available. If yes, then update it and see whether it fixes this issue.

What To Do When YouTube 360 Degree Video Not Working On PC?

If you are unable to play the videos on your PC rather than android, then try the following troubleshooting.

Solution 1: Use A Compatible Browser

When you face this issue, the first thing you should check is whether you are using a compatible browser or not. Not all browsers support the 360 degree videos on YouTube. Popular browsers, such as Chrome, Firefox, Edge, and Opera all support 360 degree videos. So, try playing them on these browsers and see if it works or not. You can also visit this link to check if YouTube supports your browser or not.

Now, check if this allows you to play the 360 degree videos on YouTube.

Graphics drivers play an important role in playing 360 degree videos on YouTube. If your drivers are outdated, it can be the cause behind the 360 video not working on YouTube. To update your graphics drivers, follow the steps given below: 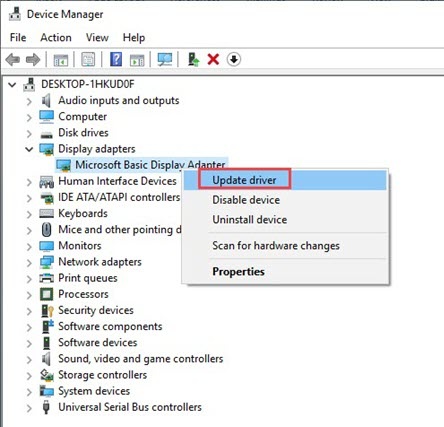 After your PC restarts, check if still the 360 video not working on YouTube.

So, there you have it. Now you know what to do when YouTube 360 degree video not working on Android and PC. The above troubleshooting solutions should help you fix this issue. If you have any questions regarding this topic, ask them in the comment section below.