Nintendo DS has some of the games that we all have played in our childhood. With the development of emulators, playing old games has been simplified. Now you no longer need to use the ancient Nintendo DS console to play the games.

First, let’s go over some of the best android NDS emulators. Playing DS games on your smartphone is the closest experience of using a handheld Nintendo DS console. The 5 emulators mentioned here are extremely strong and can emulate most DS games on Android.

DraStic DS emulator is one of the most popular Android emulators out there. It seamlessly runs most NDS games and features a wide range of customization options. Once you run the DraStic DS emulator, it automatically scans your files for DS ROMs, eliminating the need to manually navigate to each game.

It also has a user-friendly UI and most of the important settings are easily navigable. Some of the features I particularly liked are:

Not many NDS emulators on Android are out there that can stand on par with the DraStic DS emulator. However, it is not free and neither has a free version.

You can buy Drastic DS Emulator from Google Play Store.

SuperNDS is considered one of the best NDS emulators on Android. It is free to use, however, the free version does have ads, nothing that I found unbearable. The first time I opened the emulator, it scanned for all the supported ROMs on the memory and showed it in one place.

SuperNDS also has a “Recent games” section, which keeps track of the recently played ROMs on it. Also, closing the emulator doesn’t close the last opened ROM. When you restart the emulator, it automatically starts at the earlier game screen.

Some of the notable features of SuperNDS are:

Overall, the emulation is seamless. It also has a premium version, that will likely remove the ads.

Free DS for Android is another fine NDS Android emulator. It has over 5 million downloads on Google Play Store. The app UI is pretty basic; however, I didn’t find it hard to navigate. The initial screen has a continue option, that allows the previous loaded ROM to resume, and a New game option, which loads a new game.

Loading the new ROM is not complicated as it scans the directory itself and shows all the supported results. Some of the other notable features of the Free DS emulator is as follows:

Free DS for Android is overall a good NDS emulator for Android. One big downside is ads, both during transitions and banner ads above gameplay, that did harm the overall experience. However, it is entirely free to use.

Another popular Android emulator is Lemuroid. It is easily one of the best Nintendo DS emulators for Android. It can emulate most DS games fluidly. It has a user-friendly UI that asks for the directory where all the ROMs are stored on the home screen. Later it scans and shows all the supported ROMS.

Lemuroid supports NES, SNES, GB, GBA, DS, N64, PSX, and PSP games. It lacks many advanced features that other emulators on this list have. This emulator is more suited to the newer users. Some of the features that I liked are:

Overall, Lemuroid is a nice enough DS emulator that is free to use.

White NDS is a popular android NDS emulator that includes a ton of features. The home screen of the emulator has a Search Games option that, when used, automatically searches all the supported ROMs in the memory. There is also an option for manual navigation.

This emulator supports PSX, PSP, N64, SNES, NES, NDS, GBA, GBC, WSC, PCE, and MD game types and emulates all of them seamlessly. Some of the notable features I liked are:

Overall, White NDS is one of the best Nintendo DS emulators for Android.

After Android, IOS also has NDS emulators. If you are using an IOS device, here are the 4 best NDS emulators for IOS.

After that, you can load the content, or ROM, by navigating to it in your storage. Emulation in Retro Arch is seamless, and it is one of the best NDS emulators for IOS. Retro Arch supports almost all emulated type games if there is a stable core for it.

It supports all the basic features that other emulators on this list support, other than that, it has cross-platform support.

iNDS emulator is likely the best NDS emulator for IOS in the current period (exempting Retro Arch because it is not IOS specific). iNDS is a fine emulator that can emulate DS games at 60 FPS. It is the successor of NDS4iOS (later on this list) and Nitrogen. It is based on the open-source DeSmuMe and does a fine job emulating games without hiccups. 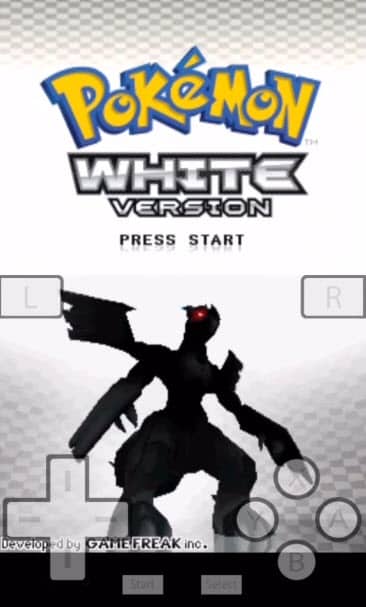 Emulating on IOS is hard, and there aren’t many emulators better than iNDS for the job. Setting up this emulator on your IOS device can be a little complicated but definitely possible.

Another fine NDS emulator for IOS is NDS4IOS. It is the oldest stable emulator for emulating Nintendo DS games on IOS that is still around. It is extremely popular and includes many advanced features. It has sync integration with DropBox, which is extremely helpful for keeping a backup of the saved game states. 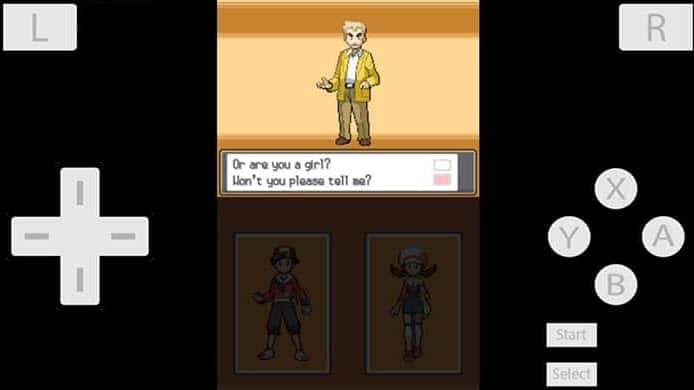 One of the reasons it is so popular is that it does not require jailbreak IOS devices to work. This emulator also has an Auto-save feature and even allows skip frames and emulation speed up. There is also controller support with complete mappable keys.

Delta Emulator is a new IOS NDS emulator and still in Beta. It supports Nintendo, Super Nintendo, Nintendo 64, NDS, GBC, and GBA emulation. This emulator also supports connected gamepads and has a simple enough UI for new users. The control layout has a look at the old NDS consoles.

It features ‘save and load’ game states, and also allows users to enter cheats. There is a speed-up option for quick gameplay and has a Google Drive and Dropbox integration. Because the emulator is still in its Beta state, it cannot load all NDS games fluidly. Expect some glitches and bugs from it.

However, with the limited number of NDS emulators on IOS, even this seems a good enough option.

Other than playing the games on your smartphone, if you are more of a PC guy, here are the 5 best NDS emulators for PC. This list includes both Windows and Mac.

DeSmuME is the most popular NDS emulator for PC. It is portable and doesn’t need installation. However, it does require certain pre-requisites for working, like Visual C++ redistributables 2015+. I found the UI very user-friendly and the different view options for the double screen layout were extremely useful.

There is a Recent games section that shows all the recently opened ROMs, which I found quite helpful. Some of the notable features of DeSmuMe are:

Overall, DeSmuME is arguably the best Nintendo DS emulator for PC. This emulator is supported on both macOS and Windows.

It is completely free to use and you can download it from here. 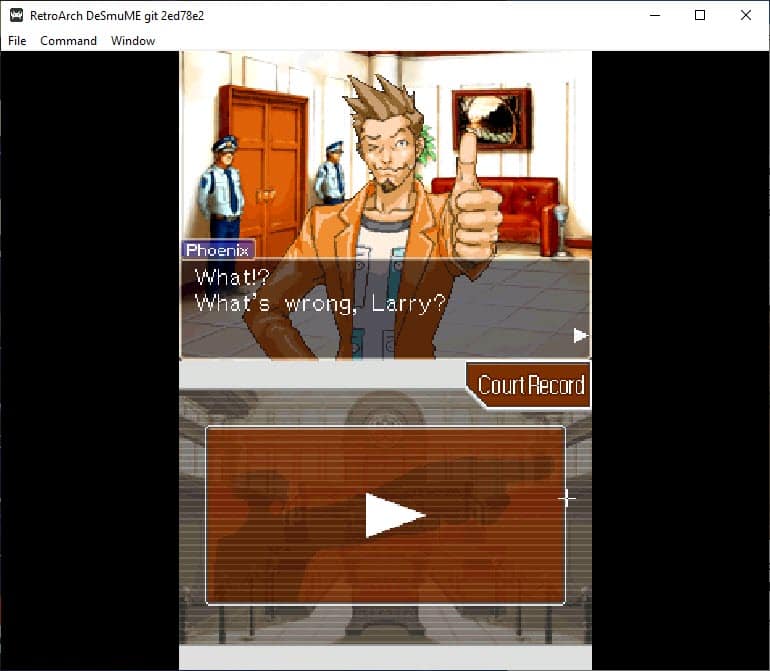 Using Retro Arch will sort you out for not only Nintendo DS games but also for most of the other game types, including PSP, PS2, and GBA.

Another fine NDS emulator for PC is MelonDS. It is one of the old times emulators in the DS emulator list and is extremely popular. It can seamlessly emulate DS games in 60 FPS. The UI is simple but not hard to navigate. The screen layout settings are extremely helpful in setting up the most optimized screen layout, depending on the game.

It also has quick save available up to 8 slots, which can also be loaded instantly. This emulator also has customizable input and hotkeys. There are also many advanced graphics and sound settings available for veterans to tinker with.

The next entry to the emulator list is the No$GBA emulator (No cash GBA emulator). It is another free tool that can emulate NDS games without hiccups. It can also run GBA ROMS. I found the UI simple and clean. The menu keeps a list of the first 10 ROMs loaded for easy access in the future. 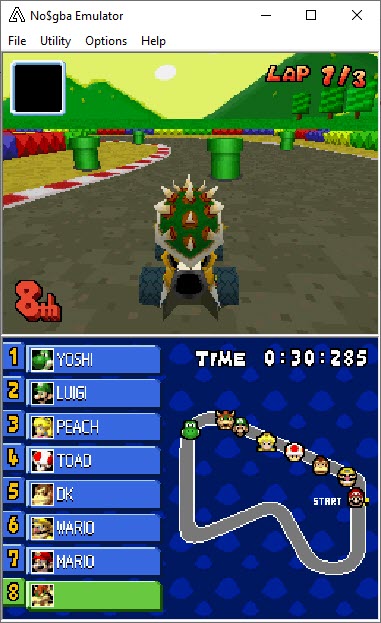 Some of the notable features of the No$GBA emulator are:

Overall, I found this emulator as simple and lightweight. It is also portable, so no need for installation.

iDeas is another great NDS emulator for PC. It has not been developed since 2012, however, the emulator still runs well. It has customizable key mapping, supports controllers, and even has a separate key config for Guitar Hero Grip. 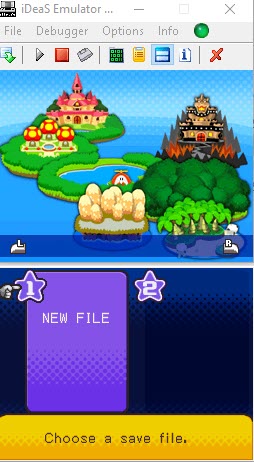 Some of the other notable features of this emulator are:

Overall, iDeas may be old and out of development, it still does a fairly good job.

So, there you have it. Here are 14 NDS emulators for PC, Android, and IOS. Share with us the emulator you chose and how your experience was with it in the comment section below.