You are here: Home / Windows / My VLC Opens Off Screen Help – How To Fix?

Does Your VLC media player open off-screen?  It happened to me a few months ago that when I opened the VLC, as I do usually, I found that the VLC opens off-screen and I can’t drag it in using my mouse. I knew that VLC was off screen because it showed open in the Taskbar and the Task Manager.

After repeatedly trying out many methods, I finally managed to get it back on screen. I wondered if other users had also faced this issue and searched online to check. I found that many users have complained that a program opens off-screen on their computer.

So, I decided to write this article and share the methods I found, and methods that worked for other users. I hope this will help users still affected by this issue to move off-screen window back into view.

Also, check out this article on what to do when iTunes doesn’t work.

How To Fix My VLC Opens Off Screen Issue?

To fix this issue, you can try the different methods given below.

The first thing you can try when you want to move Window that is off-screen is to cascade all the windows from the Taskbar. To do it, simply right-click on the Taskbar and select the Cascade windows option. This method fixes this issue for some apps, but it didn’t work for the VLC media player.

Another thing you can try is to move the window using your mouse key. To do it, hold the Shift key and right-click on the offscreen window’s icon in the taskbar. Select the Move option. Now, press your arrow keys until the window pops-up on your screen. 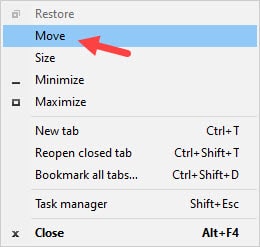 Maximize The Window From Taskbar

Hold the Shift key again and right-click on the icon of the window in the taskbar. Select the Maximize option to make the windows go Fullscreen. 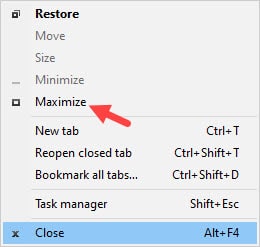 Select the window from the Taskbar and press the Windows + Any Arrow key. This keyboard shortcut snaps any selected window to the direction of the arrow keys.

Right-click on the Taskbar and select one of the other window arrangements, like Show windows stacked or Show windows side by side. 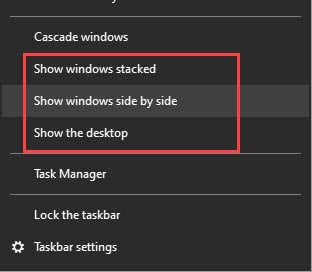 So, that’s it. Try the above methods to move window that is off-screen. Hopefully, the VLC opens off screen issue will also be fixed for you. If you have any questions related to this topic, ask them in the comment section.