You are here: Home / Others / Best Minecraft Skins That Every Minecraft Player Must Know

Minecraft is a building and crafting game in a limitless world. This game has remained a favorite of users since its release in 2009. Some players are playing it regularly for 5 years, slowly building up their virtual worlds. Some players are even trying to replicate the entire world in Minecraft.

Not only the mechanics, Minecraft is also famous for the variety of skins that you can use. In this article, I have mentioned some of the best Minecraft skins that are loved by users.

Minecraft has a huge collection of skins. From superheroes to popular creatures, Minecraft has them all. Getting the best skin and showing off in front of your friend is very satisfying. Also, those users who like role-playing will love the Minecraft skins.

The list contains the popular character skins, like superheroes and iconic characters in video games and films, which I find cool. In the end, which skin you think is best comes down to personal preferences. If you are looking for a popular skin to use in Minecraft, you will surely find it in this list.

Let’s start with some of the best superhero Minecraft skins. It consists of superheroes from both the DC and Marvel universes, and the skins are pretty cool. 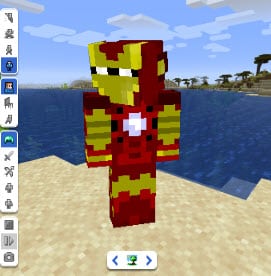 Arguably one of the most loved MCU characters is Iron Man. The Iron Man skin designed by “YoursCrafter” on Planet Minecraft is the most downloaded Minecraft skin of all time. Wearing this skin will put you in the rich lifestyle of Tony Stark and may help you improve your Minecraft engineering skills.

The skin looks amazing, with the original red and gold colors, and the iconic chest piece. It is one of the coolest looking superhero Minecraft skin that you will find.

Get the Iron Man Skin. 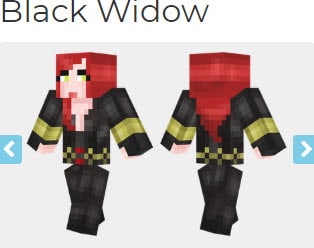 Black Widow aka Natasha Romanoff is a fan favorite Marvel superhero. The coolest superhero spy has her classic look, with red hair and black suit in this skin. Black Window has changed her look in the comics many times, but the classic redhead look from the Iron Man 2 movie is loved the most. The skin has been designed by “iilo” and is available MinecraftSkins.net.

Get the Black Widows skin. 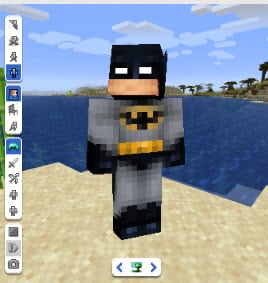 The Dark Knight of Gotham, Bruce Wayne, or the guy with a bat suit. Whatever you may call him, Batman is the coolest character of DC comics. And apparently, the Batman the caped crusader skin is the 2nd most used in Minecraft. Created by “halucid” in Planet Minecraft, it has been around for 9 years and remains a fan favorite. This is definitely one of the best Minecraft skins if not the best.

Get the Batman skin. 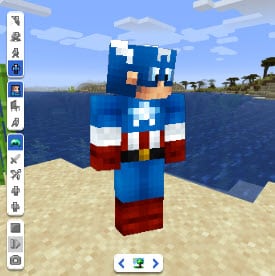 The iconic Marvel hero Captain America has inspired many kids to be brave and courageous through comics. The war hero, Steve Rogers, is widely respected as a character in the Marvel community. This iconic character has been bought to life in Minecraft by “halucid”, the same person who designed the earlier Batman skin and is one of the best Minecraft skins of all time.

Captain America’s skin comes with the iconic blue, white, and red colors with the big star on the chest. You can complete the set by crafting a shield in your game world to complete the Captain America look. This skin is also available in Planet Minecraft and has been downloaded 43,431 times to date.

Get the Captain America skin. 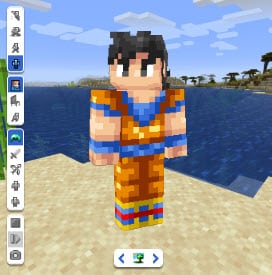 Son Goku does not need an introduction. Although not a character from American comics, Goku is the popular hero from the manga and anime Dragon Ball. After the manga was adapted as an anime and with the rise of anime lovers all over the world, Son Goku has become a well known and beloved character.

The Saiyan living among humans has his own popular Minecraft skin designed by “Daiosity” in Planet Minecraft. Since its release 7 years ago, the skin has become a favorite and has been downloaded over 11 thousand times.

With the best superhero Minecraft skins done, it is time to list the best film character skins. This list will include all the characters in the iconic film franchises that you love. 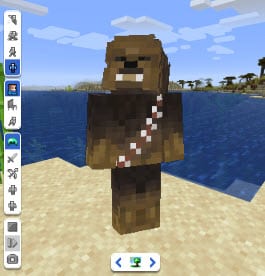 The well-known partner of Han Solo from the Star Wars franchise, Chewbacca may not be able to speak words, but his roar of unmeaningful words have made their way to every Star Wars fan’s hearts. The Chewbacca skin designed by “Maiyuu87” on Planet Minecraft will make you look cute and fierce at the same time.

Get the Chewbacca skin. 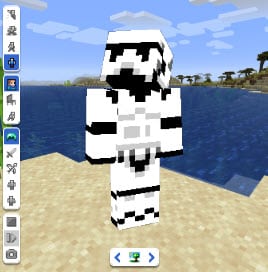 The soldiers of the empire, Storm Troopers, are very popular. The Storm Trooper Minecraft skin designed by “Hadowkai” on Planet Minecraft, is an accurate representation of the Storm Troopers from the first Star Wars trilogy. It has over 78 thousand downloads and is one of the most popular Minecraft Skins.

Get the Storm Trooper skin. 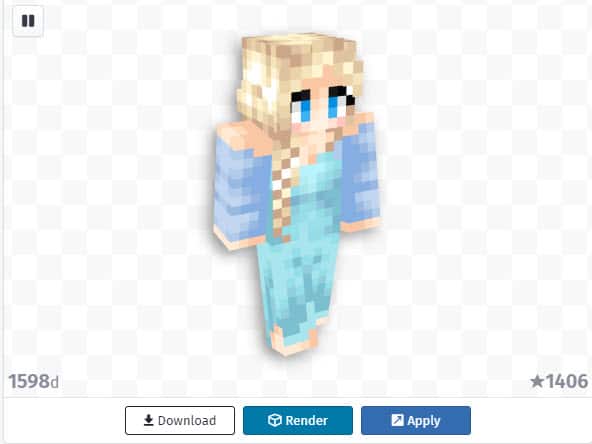 The ice queen Elsa is a favorite when it comes to Disney princesses. The Minecraft skin of Elsa available on NameMC.com accurately captures the characteristics with all its resplendent aura. The skin comes with blond hair, blue eyes, and an icy blue dress that all Frozen fans will remember. 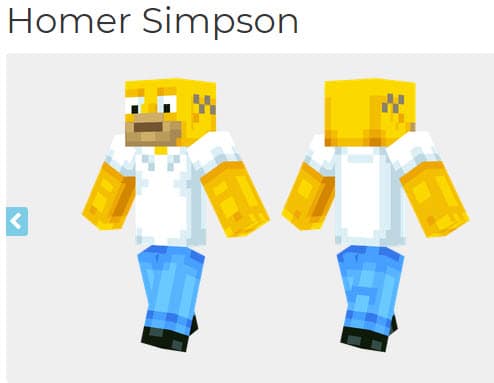 The Simpsons have been a widely successful cartoon for over 2 decades. Homer is one of the more popular characters from the cartoon. The Homer Simpson Minecraft skin designed by “Leostereo” in MinecraftSkins.net is an accurate representation of the character. If you are a Simpson’s fan, you would definitely like to use it. 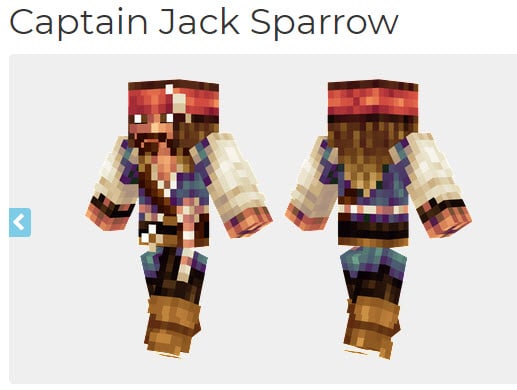 One of the most memorable pirate in modern times is the eccentric Jack Sparrow from the Pirates of the Caribbean movie franchise. Johnny Depp did an absolutely amazing job as the character and Jack Sparrow has become ingrained in many of us as The Pirate.

The Jack Sparrow Minecraft skin designed by “FennecFox” on MinecraftSkins.net has the character with his iconic red hairband, brown dirty beard, and his dirty clothes from the films. It is considered as one of the best Minecraft skins in the film characters category.

Now, the list below is categorized with some of the most popular gaming characters Minecraft skins. Role-playing a game’s character while playing another game can be very enjoyable and funny at the same time. 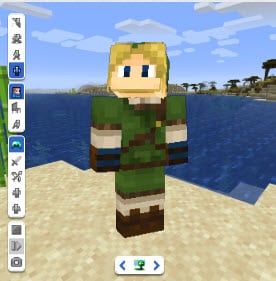 Link is the perfect skin to use while going on a Minecraft adventure. The Legend of Zelda protagonist, is known for his breathtaking adventures. May it be on the old Nintendo games or the latest Breath of the Wild, Link always remains the favorite adventurer for many users.

The Link Minecraft skin designed by “Galars399” on Planet Minecraft does justice to the iconic adventurer. The skin is a representation of the Link from Zelda Ocararna of Time for N64 that many old Zelda fans will instantly recognize.

Get the Link skin. 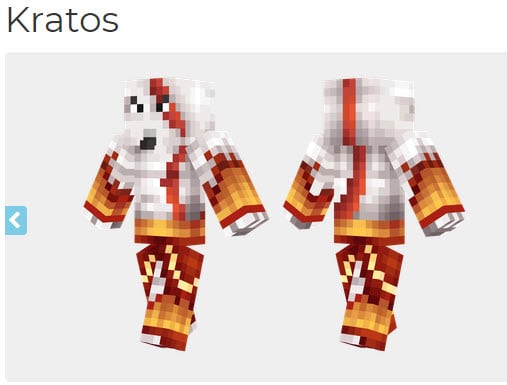 Destroy creepers and skeletons while wearing the fearsome Kratos skin from God of War. Kratos is one of the best Minecraft skins, which is designed by “Niko R” on MinecraftSkin.net. The skin is very detailed.

From the bald head and the red tattoo to the fearsome eyes and beard, it truly brings the God of War feeling in Minecraft. All you need to do is copy the iconic voice of Christopher Judge while playing and you are good to go.

Get the Kratos skin. 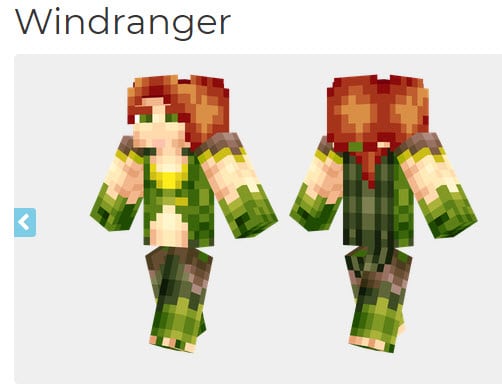 For all the Dota 2 players who also love Minecraft, the Windranger skin is what you were looking for. The skin is very detailed and looks exactly like the Dota 2 hero. Craft yourself a bow and arrow, and you are set for embarking as Windranger, traveling new and unknown lands of Minecraft.

The Windranger Minecraft skin is designed by “badboy” on the MinecraftSkins.net.

To play those horror maps of Minecraft, you need an equally terrifying horror skin to level out the fear. Horror skins are also great to scare your friends in Minecraft. Some of the popular horror skins are given below: 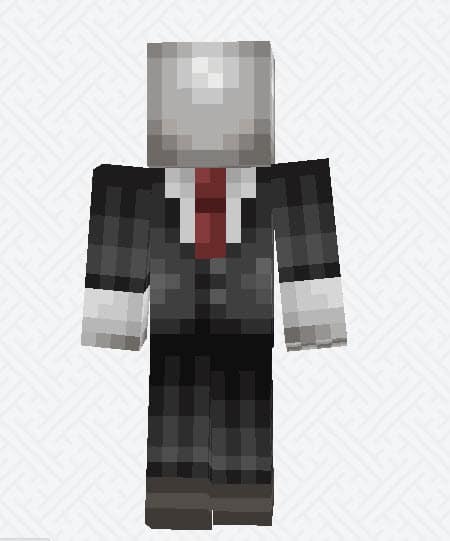 You can’t escape from the Slenderman. He will always teleport behind you to get you, and it is the same in Minecraft. Minecraft has similar creatures like Slenderman that are named Enderman. Don’t make eye contact with them or they will pounce on you until you die.

But once you wear the Slenderman skin, you don’t have to fear a bunch of copy creatures like Endermans. The Slenderman skin on the Minecraft NovaSkin website captures the fearsome features of Slenderman perfectly. The suit with the red tie ids the classic Slender man look. 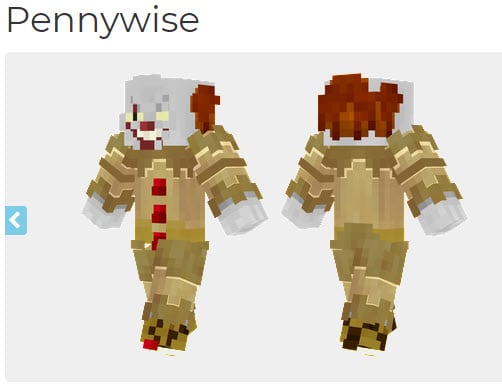 Pennywise is an ancient evil demon that appears in the 1986 Steven King book IT. The shape-shifting evil demon generally appears as a terrifying clown. The first IT movie, based on Steven King’s book, was released in 2017 that made Pennywise an iconic horror character among the masses.

The same terrifying clown-appearance of Pennywise has been captured in the Minecraft skin designed by “Apco” on MinecraftSkins.net. This Pennywise skin is dubbed as one of the best Minecraft skins in the horror category. The skin brings forth the terrifying aspects of Pennywise’s character design and is perfect for role-playing the clown demon.

So, there you have it. These are the best Minecraft skins that I will make your Minecraft character look amazing. If you have any questions related to this topic, ask them in the comment section below.